It’s not often that the CFA features ballet, but when we do, we focus on companies who are contemporary, whose vibe and energy is of today.  Trey McIntyre Project is that company – they burst onto the scene only four years ago, and since then have become a touring sensation, traveling the country, and now the world, at least 22 weeks of the year.  And when they are not on the road, they are at their home in Boise, Idaho.

McIntyre is a choreographer who came out of the Houston Ballet and then became a free-lance choreographer working with many of this country’s leading ballet companies.  When it was time for him to start his own company, he didn’t decide to base it in New York or San Francisco – he decided instead to intentionally become engaged with a Western city who needed an arts infusion:  Boise, Idaho.  As we work with our students here at Wesleyan on how to use the arts as a vehicle for community engagement and social change, we welcome a company that is doing just that: dancing in hospital cafeterias, factory lounges and schools, demystifying ballet and growing an audience that now considers the Trey McIntyre Project to be their own.

Trey McIntyre Project is not only engaging with their home community, they are also engaging with the world.  The company was chosen by the U.S. Department of State and Brooklyn Academy of Music as one of four American dance companies to participate in DanceMotion USA and will tour to China, South Korea, the Philippines and Vietnam in spring 2012 serving as a U.S. Cultural Ambassador.

Tonight and tomorrow night at Wesleyan, they’ll dance to music by Roy Orbison and the New Orleans Preservation Hall Jazz Band – they are an intensely physical, joyous company in which each dancer is allowed to bring their personality onto the stage. Come and join us!   And P.S., the CFA Theater is air conditioned. 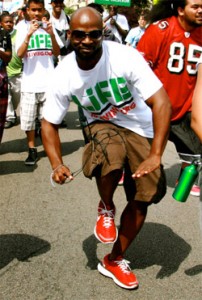 When I first saw Marc Bamuthi Joseph at New York’s Under the Radar Festival in 2005, I was struck by the fact that Marc is a spoken word artist who uses his whole body, his whole being to speak.  He is one of the few spoken word artists whose poetry is matched by his capacity as a dancer and mover, so that his body can serve as either a metaphor for his words, punctuate his words or even fight his words.

He is truly a hybrid artist and activist: a Broadway veteran, a National Slam Poetry Champion, a featured artist in Russell Simmons’ Def Poetry Jam and founder of The Living Word Project, a company based in Oakland, California that creates verse-based work that is spoken through the body, illustrated by visual and sonic scores, and in communication with the important social issues and movements of the immediate moment.

“I experience God as a verb, not a noun. I experience art in the same way. The music doesn’t live on a flat disc, it lives in the thing it does to your hips. So it is with my writing. I compose for embodiment. I write words with the intent to live it through movement. At the end of Song of Solomon, [Toni] Morrison writes, ‘…if you surrender to the air, you can ride it.’ If words are my air, dance is my surrender. In the intersection of movement and text, the collapsed space for breath to speak is like a different kind of oxygen. I am intellectually piqued by the physical journey it takes to meet the spiritual place I wish to occupy.”

Tonight at the CFA Theater, audiences will have the opportunity to see excerpts of three of his major works, Word Becomes Flesh (2003); the break/s (2008); and his newest work, red, black and GREEN: a blues (2011).  Hope you can join us! 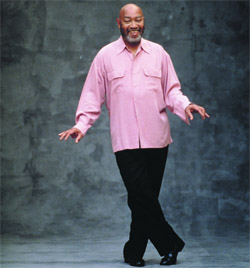