The sensational victory by pianist Van Cliburn (1934-2013) at the first Tchaikovsky International Competition in Moscow in 1958 heralded a new confidence in the quality of American music-making, as well as a new era in cultural relations between East and West.

The 14th edition of the Van Cliburn International Piano Competition, which has been dedicated to the discovery of the world’s finest pianists every four years since 1962, starts this Friday, May 24, and concludes on Sunday, June 9, 2013, at Bass Performance Hall in Fort Worth, Texas.

All performances will be streamed live in their entirety starting at 11am this Friday, and will also be available on demand at www.cliburn.org. Watch 30 pianists from Australia, Chile, China, France, Italy, Japan, Poland, Russia, South Korea, Taiwan, Ukraine, the United Kingdom, and the United States compete for the coveted Cliburn medals, more than $175,000 in prizes and awards, and three years of commission-free career management.

Enjoy over 110 hours of live broadcasts of performances, interview segments, and awards ceremonies over 17 days, along with symposia, competitor profiles, special tributes to Van Cliburn, and other behind-the-scenes glimpses and featurettes on the competition.

All competitors will perform two 45-minute solo recitals in the Preliminary Round (May 24-30). Then, twelve semifinalists will be selected to perform an hour long solo recital (June 1-4), including a specially commissioned work by American composer Christopher Theofanidis, and a piano quintet with the world-renowned Brentano String Quartet. Six finalists will perform two piano concerti with the Fort Worth Symphony Orchestra under the baton of Maestro Leonard Slatkin (June 6-9).

Make comments and submit questions to the Cliburn team and webcast host, pianist Jade Simmons; and vote for your favorite competitors (the winner of this vote will receive an Audience Award to be given during the Final Awards ceremony on June 9.)

And stay tuned for an announcement on June 25 about the rest of the programming for the 40th anniversary season of the Center for the Arts!

“Besides its illustrious list of laureates, the importance of its prizes, quality of its judges and rigorous selection process sets [the Cliburn Competition] apart.”
—Gramophone 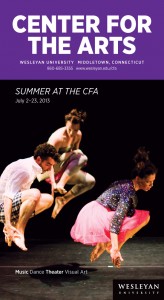 CFA Arts Administration Intern Monica M. Tinyo ’13 discusses the MiddletownRemix Festival, taking place on Saturday, May 11, 2013 from 2pm to 5pm. All festival events are free, and will take place rain or shine. The Festival Information Center will be located at 575 Main Street, Middletown, CT (in front of It’s Only Natural Market). Click here to download the MiddletownRemix Festival Schedule and Map (opens as a pdf).

MiddletownRemix is part of Wesleyan’s year-long initiative Music & Public Life, as well as part of the Center for the Arts’ greater initiative to foster community engagement using the arts as a catalyst. Not since Middletown Dances in September 2005 on Main Street, and the Feet to the Fire Festival in May 2008 at Veterans Park, has there been such an opportunity for Wesleyan students and the greater Middletown community to collaborate and celebrate the space they share. Gabriela de Golia ’13 explains this collaboration is exactly why “the Wesleyan Student Assembly’s Middletown-Wesleyan Relations Committee is so excited for this festival. For a whole afternoon, students, residents, families and renowned artists will be able to experience the artistic culture of Wesleyan and Middletown, and celebrate the work of talented community members. This is a special chance for the University and town to come together and engage with one another on a more personal and interactive level than is usually possible.”

The MiddletownRemix project stemmed from the interest of Wesleyan Assistant Professor of Music Paula Matthusen in UrbanRemix, a project created by Georgia Tech composer Jason Freeman and his collaborators. The project includes a smartphone application and website, and allows people to easily record, geographically tag and share sounds from everyday life. Over the past year, campus and community members have been uploading sounds that characterize Middletown. After monthly meetings with Middletown’s arts stakeholders group, a committee of 25 dedicated community members and members of Wesleyan’s Center for the Arts, WESU 88.1 FM, and Green Street Arts Center together shaped the MiddletownRemix festival, including partnering on a successful grant proposal to the Connecticut Office of the Arts.

This Saturday’s festival will premiere a total of eight commissioned works from Middletown artists, Wesleyan students and faculty; including “MTRX” (2012) by Jason Freeman, which will be performed by Wesleyan University’s Toneburst Laptop & Electronic Arts Ensemble, directed by Paula Matthusen, at 2pm, 3pm and 4pm at the Green Street Arts Center (located at 51 Green Street).

Don’t miss this exciting opportunity to listen and dance with your neighbors. There will be a flash mob dance at 2:30pm on Main Street between Liberty and Ferry Street. It’s not too late to learn the flash mob dance, which is open to all levels of dancers. Learn the dance on YouTube here and perform it as part of the flash mob on May 11 (participants should plan to arrive at the Festival Information Center, located at 575 Main Street in front of It’s Only Natural Market, at 2pm, and then perform the dance at 2:30pm).

For more information about six of the commissioned MiddletownRemix festival artists, check out these interviews from the Creative Campus blog:

This Thursday and Friday, Wesleyan is celebrating the incredible tenure of Urip Sri Maeny, an Artist in Residence who has taught Javanese dance at Wesleyan for 40 years. Born in Java, Indonesia, Maeny became a dancer of great renown at an early age, performing in the Royal Court of Surakarta, and in major cities all across Indonesia, as well as Hong Kong, Australia, Saudi Arabia, Egypt, Kuwait, Iraq, and Australia. Since coming to Wesleyan in 1972, she has touched the lives of generations of students. I was lucky enough to sit down with two of these students, Kimberly Ladd ’13 and Kelsey Siegel ’13, whose glowing appraisal of Maeny made me understand, at least in part, the immense impact she has had on the Wesleyan community.

In describing Javanese dance, both Kelsey and Kim emphasize how different this form is from others taught here at Wesleyan. Kelsey tells me that originally, courts in Indonesia considered watching Javanese dancers to be a form of meditation, and would bring in dancers for this purpose. “It’s really slow and it’s very articulate with your hands,” she says, “it’s very therapeutic.” Coming from a hip-hop background, Javanese dancing was a radical change of pace for Kelsey, but one that Maeny made inviting and manageable. “She introduced me to the culture in a way that was so comfortable for me that I didn’t feel like it was something I could never understand. I had no idea what Javanese dance was, but immediately I wanted to be a part of it.”

It is apparent from the enthusiasm with which both Kim and Kelsey talk about Maeny how much she has influenced them. When I asked what distinguishes her as a teacher, Kim tells me how willing she is to take time for her students. “She has a really open schedule—she’ll come in on a day when she’s not teaching to work with you.” Kelsey adds that her style is very unique, and one that puts a lot in the hands of the students. “She doesn’t need to show you every detail, but she’ll do it with you and then correct you at the end. She has a way of not really showing you the movement, but you just kind of do it, and you don’t really know how it happens.”  Kelsey and Kim both emphasize how it is her care and complete attention to students, as well as her complete understanding of her craft, that set Maeny apart as a teacher.

This week, both Kim and Kelsey will take part in a piece choreographed, adapted by, and featuring Urip Sri Maeny [excerpts from the dance drama “Ramayana”] to be performed at the World Music Hall on Thursday, May 2 at 7pm. “You don’t say no to Maeny!” Kelsey laughs, explaining how she became a part of the project. “She’s just a brilliant mastermind,” Kim adds, and tells me about the mythic narrative dance. “It’s this whole drama which she conceived and put together and edited, and brought us all with our different experiences to dance one form. It’s really astounding.” Maeny’s approach to the choreography, all of which is her own, is to let everyone take the dance and put it into their own styles and their own bodies, in a way that is very unifying. As Kim puts it, “she knows the whole story, and we’re still discovering how we fit in. But that will happen.”

Before I leave her interview, Kelsey tells me her lasting impression of Urip Sri Maeny, which I can’t help but to quote at length. “I just have an image of Maeny that will always stay in my head,” she says. “It’s just me walking into the Center for the Arts and I see her—she’s the cutest woman—just running out, and she comes up to me and is always hugging me and kissing me and making me feel so welcome. I’m a dance major and a huge part of being a dance major is Maeny. She’s one of the reasons why I feel so safe in this community, and so loved. Just so loved.”

The celebration begins with a performance of excerpts from the dance drama “Ramayana,” choreographed, adapted by, and featuring Urip Sri Maeny in her last production at Wesleyan, with Adjunct Professor of Dance Susan Lourie, undergraduate and graduate students, and Middletown community members; accompanied by the Wesleyan Gamelan Ensemble, under the direction of I.M. Harjito and Sumarsam.

The annual Dr. Cynthia Novack Lecture will address cultural reconstruction in post-genocide Indonesia with a free talk in World Music Hall by dance scholar, choreographer, and cultural theorist Dr. Diyah Larasati, author of The Dance That Makes You Vanish (University of Minnesota Press, 2013).

The talk will conclude with a tribute to Urip Sri Maeny and the legacy of Javanese dance at Wesleyan by special guests. The lecture and tribute will be immediately followed by a reception and book signing in World Music Hall.