Marc Bamuthi Joseph’s critically acclaimed Word Becomes Flesh is a refreshingly different approach to theater. The show combines aspects from hip hop, spoken word, dance, and Mr. Joseph’s own personal experiences of maturation to create a deeply moving and intense performance. Recently Word Becomes Flesh has been reworked as an ensemble show from its 2003 debut as a solo work originally performed by Mr. Joseph.

Word Becomes Flesh is presented as letters from a man, Mr. Joseph himself, to his unborn son. I spoke with performers Dahlak Brathwaite and Daveed Diggs about their experience in performing another man’s work. “The one thing that we all experience is a birth story, either about ourselves or others,” commented Mr. Brathwaite. Not only are we all connected through our birth stories, but also our personal maturing experiences. For ensemble member Mr. Diggs, “more globally, it’s about growing up.”  Whereas Word Becomes Flesh is the exact story of one man’s personal experience, it is also telling the tale of an entire community, and gives voice to the male perspective of childbirth, a voice that is not often heard.

Mr. Joseph directs the five performers, each of whom shares a strong connection with the play. “At an age when I’m stepping into manhood, and adulthood, it was easy for me to relate to the piece,” commented Mr. Brathwaite. “Bamuthi incorporated the performers’ experiences in re-working the show. [The ensemble] didn’t have to try hard to fit our story in, his story was already our story; we just wrote the details. There are so many moments when his truth is so fine and personal that it speaks volumes, there are always multiple access points,” said Mr. Brathwaite.

Word Becomes Flesh is intense, meaningful and expressive. Mr. Brathwaite commented that “the writer, the listener, the audience members find themselves grasping at the elements of the piece—themes of fear, judgment and maturity.” What was a once a solo work demands even more attention as an ensemble piece; the addition of the ensemble adds an intensity that cannot be ignored. “The audience gets more shakes when we dance, more colors in our voices, our youth, our energy, our own kind of charisma,” noted Mr. Brathwaite. 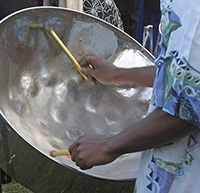 Dance to the island rhythms of the Hartford Steel Symphony! Founded in 1989, this premier Connecticut steel pan group performs calypso, reggae, pop, classical, and jazz tunes under the musical direction of Kelvin Griffith and Curtis Greenidge, and has shared the stage with artists such as the great panist Len “Boogsie” Sharpe of Trinidad.