Charles Mee’s pulsating romantic comedy Summertime (2000) weaves together elements of William Shakespeare, Molière, and René Magritte. A dress rehearsal for Summertime was held on November 16, 2016 in the CFA Theater.

Actor/director Kaneza Schaal ’06 offers a powerful meditation on loss, grief, and ritual in a performance incorporating projection, sound, text, and movement. Inspired by the Egyptian Book of the Dead–a 3000-year-old series of spells and incantations intended for the deceased as a blueprint to the afterlife–GO FORTH (2016) creates space for the presence of the absent, the imagined, and the longed for. A dress rehearsal for GO FORTH was held on September 15, 2016 in the CFA Theater.

Dear Friends of the Center for the Arts,

It is astonishing to me that Friday April 1 is my last day at Wesleyan University, after nearly seventeen years. I wanted to send you a note to thank you for being patrons of the Center for the Arts. There is simply no way we can ever welcome artists to Wesleyan without the presence of an engaged and committed audience. You have no idea how wonderful it was for me to look out at you from the Crowell Concert Hall or CFA Theater stage, or to see you at an opening in the Ezra and Cecile Zilkha Gallery. I knew that you were there to join me in celebrating what the arts can tell us about other cultures and other worlds; how they can help us to make sense of the world in which we live; and how they can make us feel both the exhilaration and the sadness of what it means to be alive. I want to thank you, in particular, for the times you bought a ticket to a performance by an artist whom you didn’t know but, because we at the CFA felt it was an important artist or group, you took the risk.

In these last days at my desk overlooking the CFA Courtyard, I am reflecting on so many great moments when we shared such joy and excitement not only for visiting and faculty artists, but also when we marveled together at the virtuosity and creative power of Wesleyan students and all that they have to offer us.

I will miss my Wesleyan and Middletown families greatly, but as an alum and parent of a member of the class of 2016, I know that I will return often and continue to experience the arts as only Wesleyan can present them. I also want to take the opportunity to introduce Laura Paul, Interim Director of the Center for the Arts, who will lead the CFA in its next chapter. Together we have been planning a 2016–17 season of performances and exhibitions that I know you will enjoy.

If, by any chance, you are free this Friday, April 1, I will be in Crowell Concert Hall at 8pm to introduce the great Wu Man and the Shanghai Quartet. I would love the chance to say goodbye and thank you in person; if not, I hope you will come to visit me this summer at Jacob’s Pillow Dance Festival in Becket, Massachusetts (if you missed the announcement in January, I’m going there to be their new Executive Director)!

Thank you again for your generous support of the Center for the Arts.

Advanced student choreographers had their dress rehearsal for the Winter Dance Concert on Thursday, December 10, 2015 in the CFA Theater. 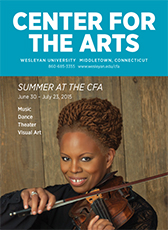 Programs, artists, and dates are subject to change.

CFA Arts Administration Intern Chloe Jones ’15 talks to stage manager Julia Tyminski ’17, and Albert Tholen ’15 and Grace Nix ’15, who are performing as Mr. and Mrs. Smith, in the Wesleyan University Theater Department production of Eugène Ionesco’s “The Bald Soprano,” which runs through Saturday, April 25, 2015 in the CFA Theater.

In 1950, Romanian playwright Eugène Ionesco wrote The Bald Soprano, one of the seminal plays of Theater of the Absurd. He was inspired by the cliché dialogues between the imaginary Mr. and Mrs. Smith in an English phrasebook for beginners. Albert Tholen ’15 and Grace Nix ’15 play Mr. and Mrs. Smith in the production by the Wesleyan University Theater Department, directed by Professor of Theater Yuri Kordonsky.

“We are a proper British couple with a twist,” says Ms. Nix with a sly smile.

The entire play takes place in the living room of Mr. and Mrs. Smith, in their home on the outskirts of London. “It’s a drawing room drama,” says Mr. Tholen. “One that goes horribly awry.”

With The Bald Soprano, Mr. Ionesco rejected coherent plot, character development, and the concept of realistic drama. Through dark and daring humor, the play discusses the futility of meaningful communication in contemporary society, and the tragedy of language in a universe driven by chance.

“It’s a very different logic of causality in this world,” says Ms. Nix. “An illogical logic.”

Ms. Nix and Mr. Tholen, along with the other four actors in the cast (Edward Archibald ’17, Sara Fayngolz ’17, Natalie May ’18, and Peter McCook ’16), have been working with Professor Kordonsky since the beginning of the semester. Together with dramaturge Rachel Sobelsohn ’17, assistant director May Treuhaft-Ali ’17, and stage manager Julia Tyminski ’17, they spent the first two weeks of rehearsal analyzing different translations of the play, originally written in French, to draft their own composite script.

“We spent hours talking about single words,” says Ms. Nix. “Until we arrived at a script, which we felt was the best expression of what this play is trying to say.”

“It’s nice to have ownership over the language in that way,” says Mr. Tholen. “It’s become our script.”

Professor Kordonsky gave the actors a great deal of creative responsibility throughout the process. They would divide into subsets and work on specific moments in the script, then come back together as a cast and share. They created scene after scene, gradually bringing both clarity and complexity to Mr. Ionesco’s absurdity.

“I think more than anything else, Mr. Smith is like a coat that I wear,” says Mr. Tholen. “I don’t get on stage and become him. It’s more of an attitude.”

“It’s the total acceptance of a different world,” says Ms. Nix. “Even though it doesn’t make any sense, it feels right.”

The Bald Soprano invites its audience to view the play from the actual stage of the CFA Theater, rather than from the house seats where one faces a proscenium.

“For this play you want an intimate connection with the audience,” says Ms. Nix. “If the audience were farther away, I think we would lose that connection and some of the urgency of the play.”

Sitting on the stage of the CFA Theater, the audience finds itself right there in the living room of Mr. and Mrs. Smith — in close proximity to the play’s simple set: a couch, some chairs, a clock.

“The set looks relatively realistic,” says stage manager Julia Tyminski ’17. “But the minute the show starts you realize it’s an absurd production, yet the actors are playing it as if it’s realism, and that’s where the comedy comes in.”

The Connecticut premiere of Lucidity Suitcase Intercontinental: 17 Border Crossings, a solo work written and directed by Thaddeus Phillips based on his actual travel experiences, was performed on February 21, 2015, at the CFA Theater. Images by Sandy Aldieri of Perceptions Photography. Click here to view the entire album on flickr.