Pamela Tatge, Director of the Center for the Arts, discusses the four new trees planted in honor of the CFA’s 40th anniversary, to be dedicated at the concert by Amy Crawford + STORM and mamarazzi on Saturday, November 2, 2013 at 8pm in Crowell Concert Hall.

If you’ve ever taken a stroll through the Center for the Arts courtyard before a performance, or sat out on the lawn for an outdoor concert, you know how important the trees are to the architecture of the CFA. Architect Kevin Roche designed the buildings around the trees back in the early seventies, making sure that the building equipment would have as little impact on them as possible.  Over the past forty years, many of the trees have died from extreme weather conditions and disease.  In honor of the CFA’s 40th anniversary, the University has planted four new trees including one right outside the window of my office on the second floor of the Ezra and Cecile Zilkha Gallery. Here’s a picture of them planting it earlier this month. 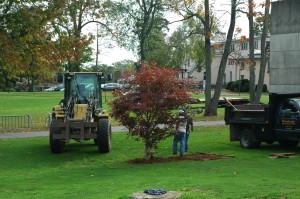 This beautiful red maple replaces a willow tree we lost during Hurricane Irene.  It’s wonderful to come into work every day and see that little tree blowing in the breeze, knowing that one day it will grow to be every bit as majestic as its older brothers and sisters in the complex.

Please join us for the 40th Anniversary Celebration Concert of music alumni this Saturday, November 2, 2013 at 8pm when the trees will be dedicated, or just come by and take a stroll and welcome them to the CFA!